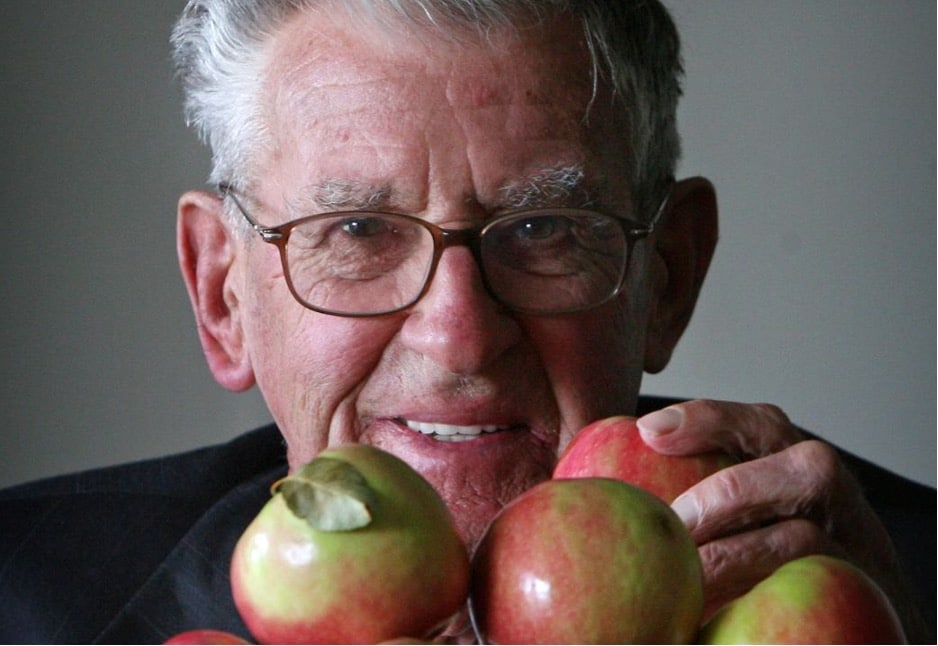 The UK-based Apples and People interviewed John and industry peers last year, celebrating his immense contribution to the apple industry in a tribute which we share below. The original article can be found here.

In 1984, John Cripps selected what was to be named the Pink Lady® apple from an extensive breeding programme in Western Australia. Launched in 1991, Pink Lady® was the world’s first apple ‘brand’ and is grown across the world.  Now ninety-four, John was born in the UK on 9th April 1927. He grew up in Steyning in Sussex and during the war grew fruit and vegetables to supplement food rations. John was intrigued that the Cox’s Orange Pippin apple tree in his garden had been created by crossing two other apple varieties, and this helped inspire his subsequent career path. At the age of twenty-eight he took the bold step of emigrating alone to Australia to take a job with Western Australia Department of Agriculture.

John was given permission in 1973 to begin the first apple breeding programme in Western Australia. His aim was to combine Golden Delicious, and the firm, storable Lady Williams (a local variety). This required both patience and determination from John and his team of mainly women technicians: Crosses are made by hand pollinating, waiting until an apple develops, and then planting its pips to grow new seedlings. And because of an apple’s large genome, the chance of propagating fruit with the perfect combination was slim, so a total of 108,000 crossed seedlings were planted. By 1983, the trees were fruiting, and all had to be tasted, though many were inedible. However, the following spring John found one of the crosses had kept well over winter, retaining good appearance, taste, crispness and juiciness. This apple became the Cripps Pink variety.

In 1988, having read about a new apple variety bred in Western Australia, French nurseryman Dominique Toulemonde jumped on a plane to Perth and arrived unannounced at John Cripps’ front door. This remarkable opportunistic dash, on behalf of the Star Fruits group of nurseries in the Rhone valley, meant that he reached John before other nurseries. Dominique was impressed with the apple, and John and Dominique developed a life-long friendship.

“The fruit has a unique pink skin colouration, is firm and juicy, with a good sugar/acid balance. And Pink Lady® was the right name.”

It was John Cripps himself who came up with the name Pink Lady®. It is the pink gin cocktail drunk by the naval officer hero of his favourite novel, Nicholas Monsarrat’s The Cruel Sea, a story set during the Battle of the Atlantic in the Second World War when the navy ensured that the British did not starve.

Star Fruits, and since 1997 their marketing arm the Association of Pink Lady® Europe, brought complementary skills, enterprise, and knowledge of the international fruit market, and crucially a new approach to the apple supply process: The Cripps Pink apple would be trademarked like a brand – Pink Lady®.

“The Pink Lady® model really did change the scene for apple varieties. A trade-marked brand name makes a lot of sense for a new apple variety and is now pretty much the norm for new releases.”

A complex process to register Pink Lady® around the world was undertaken by the Western Australia Department of Agriculture, using regionally-based Master Licensees such as Star Fruits in Europe. The Department then handed the trademark to what is now Apple & Pear Australia Limited (APAL), the peak industry body supporting Australia’s commercial apple and pear growers.

APAL through its now licensed commercial partners created an International Pink Lady® Alliance, and regional marketing companies such as Coregeo in the UK, to help guide policies for the brand throughout the supply chain from growers to packing sheds to retailers, maintaining strong marketing, packaging design, and consistent apple quality standards.

Pink Lady® eating quality is assured through measures of firmness, sugar content (brix) and skin redness and only apples passing these tests are sold as the Pink Lady® (with the pink heart label). Apples not up to standard are sold as Cripps Pink, the variety name.

So, what does it feel like to have created an apple variety and brand known the world over?

John says that it gives him a boost when he sees the Pink Lady® in the supermarket. It has been more successful than anyone could have imagined, and he is proud that it is grown and sold around the world.

And commenting on recent research on the cardiovascular health benefit of eating Pink Lady® apples he adds,

“The apples contain the highest concentration of flavonoids grown, so I have achieved something useful”

Flavonoids are natural chemical compounds found in plants, including apples, which are associated with health benefits. Testing a range of apples grown in Australia, researchers found the highest concentrations in Cripps Pink, mainly the skin.

John says that creating Pink Lady® did not change his life. He rolls his eyes, bemused by the attention about something that happened a long time ago. But he has helped shape recent apple history. Above all, the Pink Lady® apple is a human story – of determination, opportunity, and organisation, cemented by relationships between people around the world. 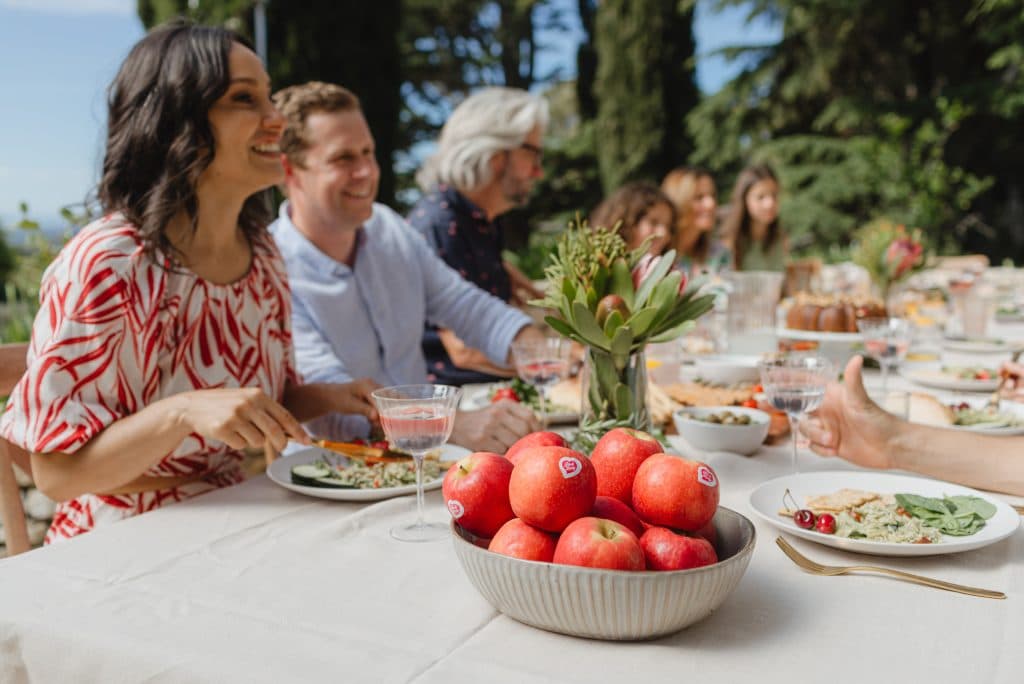 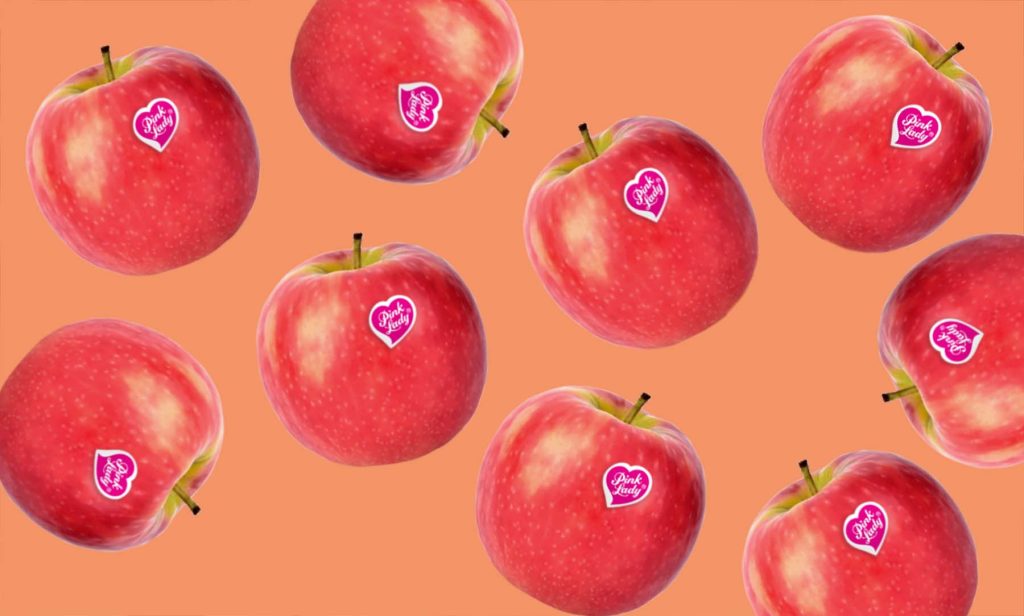